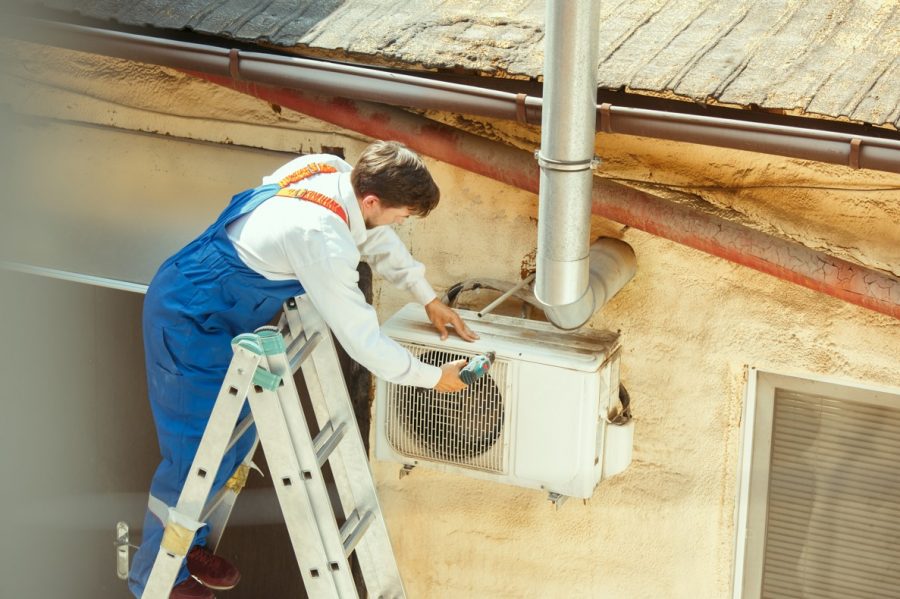 What Is the Difference Between Residential and Commercial HVAC?

The biggest difference between commercial and residential HVAC systems is their power requirements. The size of most business buildings is typically much larger than that of a home and thus requires additional power. It takes a lot more energy to cool an entire building than it does to cool a single room. It is common for businesses to use through-the-wall or through-the-window units that are bigger than those used in residences. However, the size of the rooms is not the only contributing factor. It is common for commercial buildings to have server rooms or machinery that produces more heat than that of the typical residential home. Because of this, the system of a commercial building has to run longer and harder than that of a residential system. To prevent overheating or frequent breakdowns, the systems are built to be bigger so they can handle the additional load. These larger systems typically have larger fans and require more power to function, further increasing the amount of energy needed.  To put this into perspective, the power needed to run residential air conditioners will cost $3–$10 per month in electricity when set on auto while a commercial system can expect bills upwards of $100 per month on a year-round basis, depending on the season, the amount of space it is covering and the equipment that affects the temperature of the building.

One of the biggest differences between residential and commercial units is installation space. While residential units can be installed in smaller spaces and is typically found on the side of the home, larger commercial units require a bit more room to set up. You’ll want to make sure you leave enough space for installation; that way, you won’t have to cut corners when it comes time to install your unit.

It also helps if you have an idea of what kind of capacity your building needs before installing the unit. For many commercial spaces, there are multiple locations for the installation of the unit so that it can be the most efficient as possible for the space. If your business is open 24/7, you might need a bigger system than something that only runs during normal business hours. While larger air conditioners are typically more expensive up front, they’re generally worth it because they use less energy over time thanks to their increased efficiency when it comes to continuous use. When considering residential spaces but on a commercial size such as an apartment building, it is common for apartments to have many residential units instead of one large commercial unit. The biggest reason for this is that the system is likely to be run in small spaces at a time. Perhaps even smaller than a typical home. In these situations, it’s often cheaper to manage residential systems than it is to handle a large commercial system.

Typically, commercial systems are much larger than residential units. In addition to having greater heating and cooling capacities, they’re also likely to be installed in rooms with greater square footage. They’re also more likely to have advanced features such as increased insulation, variable speed compressors, variable refrigerant flow rates, variable airflow rates, automatic controls/programmable controllers, etc. Some of these components increase initial cost but save money in maintenance down the road due to their longer lifespans.

Over-specifying your system may cause initial sticker shock but can help you avoid costly maintenance issues later on down the road. For example, a large unit that may cost more to run on a daily basis, will likely be more efficient, and thus it won’t work as hard and it will likely require less maintenance. The better than average efficiency ratings will pay for itself over time because of its low operating costs and maintenance cost relative to its high initial price tag.

Another important difference between commercial and residential air conditioners is their size and how much it costs to buy or install them. When you work in a large office building or manufacturing plant, you need an air conditioning system that can handle a lot of units at once—typically many thousands of square feet. In order to supply that kind of cooling power, you need a very powerful machine that costs significantly more than a unit for a residential building. Additionally, some rooms will need to be kept cooler due to machinery or computer servers while some rooms will need to be kept cooler due to the number of people inside the space. One person doesn’t provide a lot of heat but places that person in a cubicle or on a factory floor next to 50 other people and the people will increase the amount of heat produced in that room.

The HVAC industry is big, with billions of dollars spent annually on commercial and residential HVAC products. Keep this guide in mind as you continue to research the differences between residential and commercial HVAC systems.