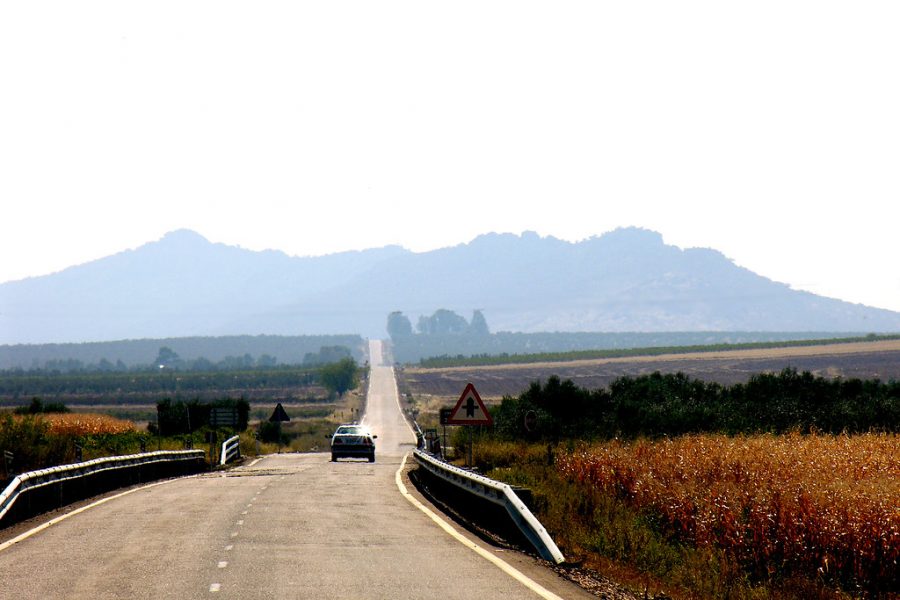 Where to Go From Madrid? 6 Perfect Day Trip Ideas

As the locals joke, wherever you go from Madrid, sooner or later you will find yourself in a royal residence or an old village. However, there’s a lot of truth in this – nine iconic destinations are located within driving distance from the Spanish capital.

These cities are dotted with amazing sights, so while in Madrid it makes sense to hire a car and spend a few days visiting nearby cities. Which cities deserve your attention? Check out the following list! 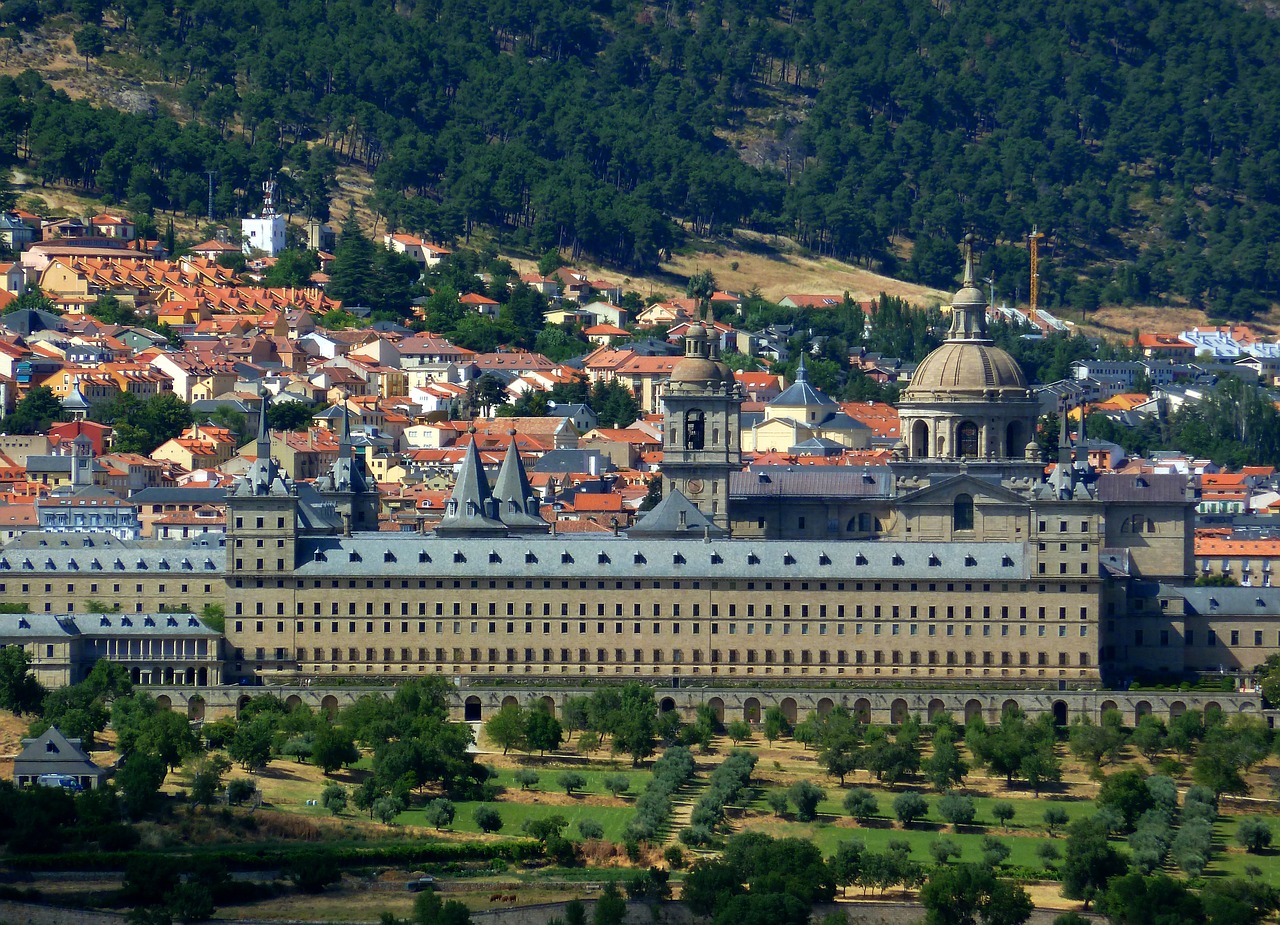 The view of the grandiose architectural ensemble El Escorial, erected in the 16th century, is the first thing that will amaze your eye when you drive up to the city in a hired car. The complex combining a monastery with a majestic cathedral, a royal residence with a monumental palace, museums and gardens, and a tomb of monarchical dynasties has become a symbol of the country.

In the center of El Escorial stands the Cathedral of St. Lawrence. The northern side is occupied by the Palace of the Infants, and the southern one – by the monastery buildings. Don’t be confused by the ascetic palace facade. After going inside, you will be amazed by the interiors and luxurious decoration of the Military Hall and the royal chambers. The cathedral is strikingly decorated with silver, gold, and bronze details, while many sculptures are made by outstanding masters.

On the walls and ceilings, you will admire the paintings and carvings made by the best painters of the Middle Ages and the famous El Greco. You should definitely go to the El Escorial Art Museum, where you will see rare paintings by Diego Velazquez, Jose de Ribera, El Greco, Tintoretto, and Francisco Goya.

El Escorial is located 62 kilometers from Madrid, so you can get there in less than an hour. 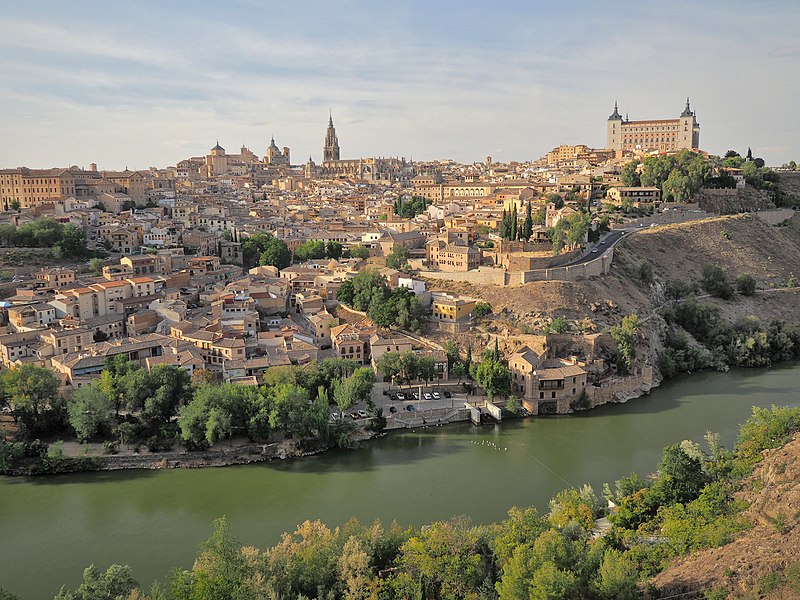 Toledo is located 88 km from the Spanish capital. If you pick up the Madrid Airport car hire, you can easily get there in an hour.

Over the centuries, Toledo has combined Arab, Jewish and Christian traditions and cultures, which couldn’t but affect its architecture. So the city literally adjoins the Mosque of Christ the Light, the Synagogue del Transito, and the Cathedral. However, most travelers go to Toledo not for religious diversity, but for the works of El Greco, for whom this city was a source of inspiration. You can look at the master’s creations in Iglesia de Santo Tomé, where his famous painting “The Burial of the Count of Orgaz” is located too. 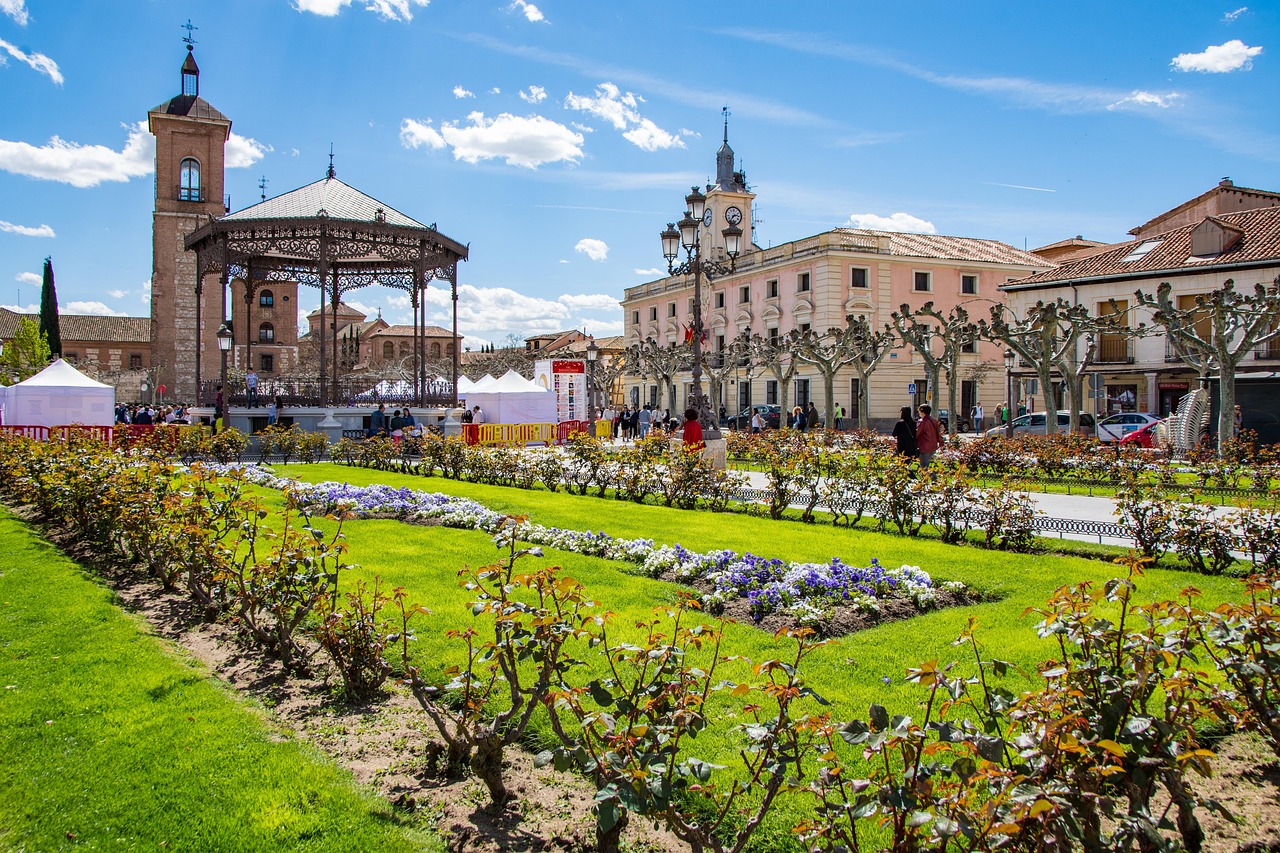 Located 40 kilometers from Madrid, Alcala de Henares is also worth a visit. Moreover, the journey by hire car will take not more than an hour.

A visit to Alcala de Henares is a must for all fans of the genius Cervantes because it was here that the great writer was born. Be sure to visit his house-museum and feel the atmosphere of Spanish life in the 16th century.

Don’t miss the local university where Lope de Vega and Ignacio de Loyola studied – you can even enter the auditorium. The city is also a place of religious pilgrimage for the brutally executed Christian boys in the 4th century. 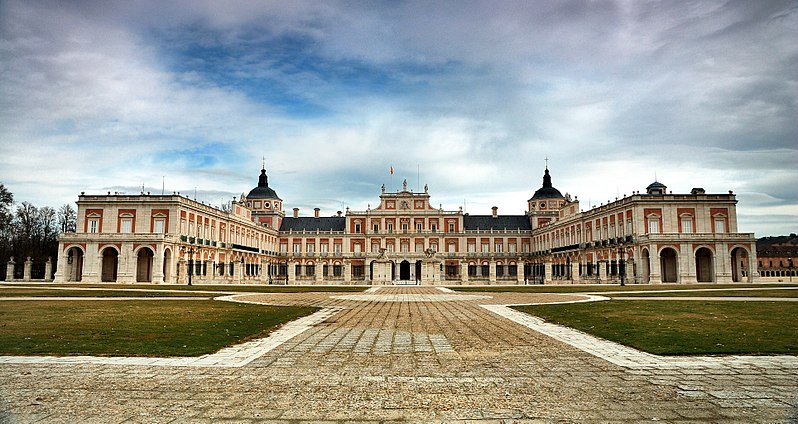 Having visited Aranjuez, located 48 km from Madrid, you will enjoy the view of architectural masterpieces, wonderful parks, and unique collections of museums.

The most magnificent building of Aranjuez is the pompous summer Royal Palace, included in the UNESCO World Heritage Site and nicknamed “the Spanish Versailles”. It amazes with the luxurious baroque style of the exteriors of the facades and interiors of its premises. The elegance of the mail hall and the interior of the richly decorated bedrooms are really delightful.

In the halls of the first floor, there are expositions of the museum of the palace life of monarchs. The palace is surrounded by an amazing garden and park complex with four original parks. In Piazza San Antonio, you will admire the fountain and the surrounding arcades from the royal court. In the center of the square rises the baroque royal church of St Antonio. 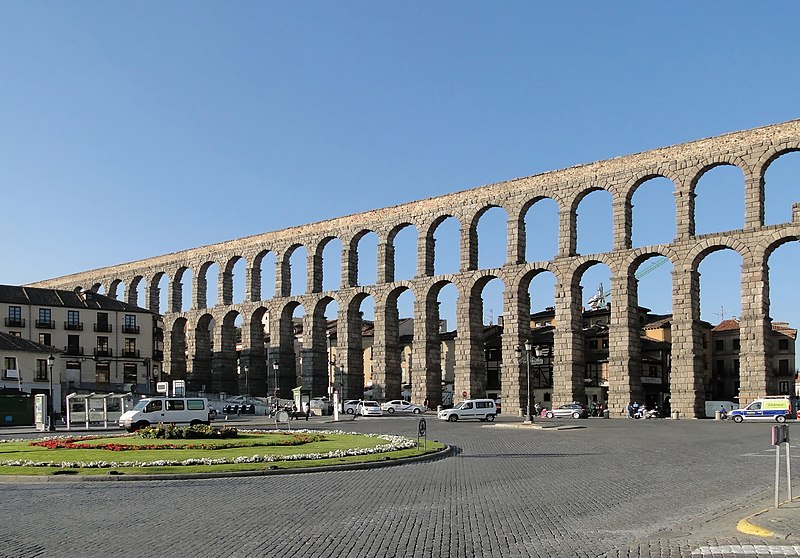 The picturesque old town of Segovia, founded by the Romans more than 2 thousand years ago, is located 96 kilometers north of Madrid. It will take you about an hour and a half to get there by hire car.

The creation of ancient Roman architects is a unique aqueduct. Its monumental structure, consisting of 167 granite arches, and stretching for 818 meters, has become the hallmark of the city. You will be amazed by the stunning view of the medieval royal castle Alcazar, towering on top of the cliff.

The facade and interior of the castle are truly luxurious. The decoration of the Throne and Armory rooms with stucco gilded ceilings, ancient tapestries, stained glass windows and knightly armor strikes with particular beauty.

Among the cultural buildings, visit the art museum to admire the paintings of Dürer and Rembrandt. Also, Romanesque temples and medieval monasteries of Segovia will delight your eyes with unique architecture. 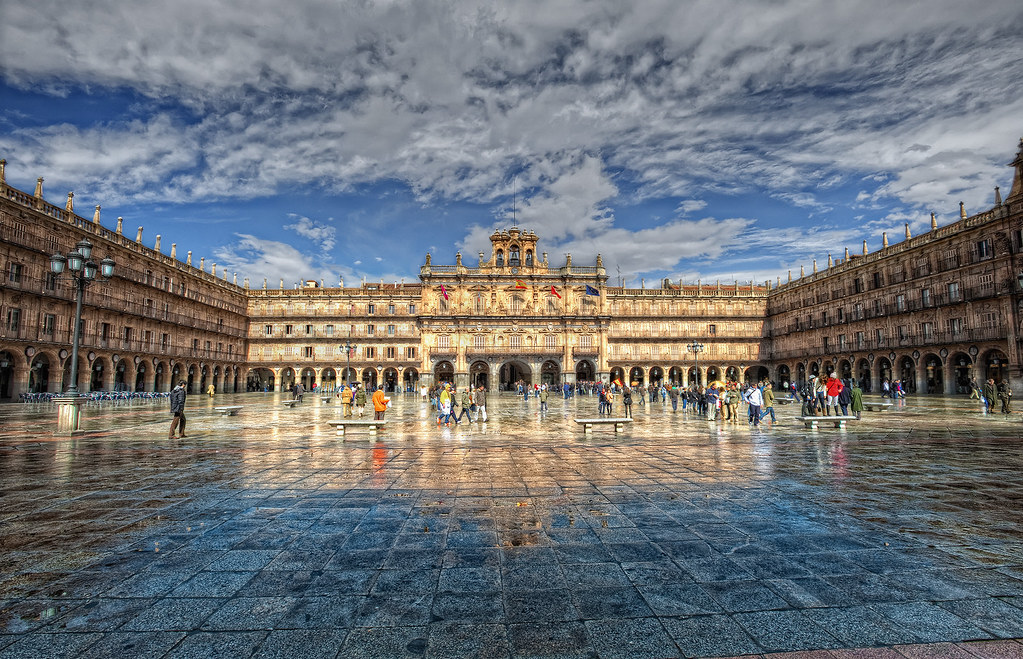 Salamanca is another place where you should go in your hire car. The city is famous for the oldest university in Spain, founded in the 13th century. You will enjoy the atmosphere of the old streets with mansions built of golden sandstone.

The baroque Plaza Mayor, dating back to the 18th century, has become the center of attraction for visitors to the city. It’s bordered by buildings of an authentic Spanish Renaissance style. The building of Casa de las Conchas attracts with its originality – its facade is decorated with 300 seashells.

Another highlight of Salamanca is the colorful university building of the early 16th century. Its facades with royal coats of arms delight with the plateresque style, expressed with bizarre relief elements of decor and stone patterns.