A few years back, Princess Haya was that one lady which the Emir of Dubai seemed to be totally in love with. In fact, she was the Center of attention in almost every other public event as Sheikh Rashid used to take his 6th wife almost everywhere, with his hands holding hers in order to show off the immense affection he had for his favorite wife.

The marriage of Sheikh Rashid with Princess Haya has till date been a part of so many controversies as no one could ever figure out the truth behind how His Highness Sheikh Rashid got to meet the Jordanian Princess and what sparked the infatuations between them. Reports do tell that the duo first met because of their undying love for horse racing, but that again is still an assumption based on how media has seen them both interacting before marriage. 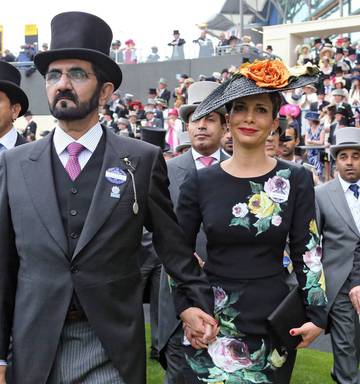 However, that being said, as now the phase of marriage is over and both of them have hatred for each other to the point that the only option left is divorce, what really went wrong along the way that their relations got so worst?

As it is pretty much understandable that you just can’t wait to know the truth behind Princess Haya and Sheikh Rashid Al Maktoum’s Divorce since it is the hot topic in town these days, I have actually decided to show you both sides of the story as the answer to what you are looking for. Their case is in court and the decision about their split will come out in the mid of November but before that comes, let’s start with what you should know about the whole issue.

According to Princess Haya and as quoted by The Sun, she took the bold decision of divorce right after knowing the truth regarding how Princess Latifa was treated under custody upon Sheikh Rashid’s order. Latifa was imprisoned and tortured to a great level (same say to death), which later frightened Princess Haya as well.

The only mistake of Princess Latifa was that she choose to run from Dubai after knowing the fact that her father Sheikh Rashid won’t let her live an independent life in the United States. She did make the best plan but was unfortunately caught by the Indian Navy and after that, she was only seen once posing with the former UN High Commissioner for Human Rights, Mary Robins. But that was also the last glimpse of her as right from that date till now there have only been speculations about where the Sheikh has kept her.

But as soon as Princess Haya got to unveil the truth, she decided to run away from Dubai herself along with two children that she has with Sheikh Rashid. Princess Haya was blunt in her reason while stating that she doesn’t want a future like that for her off springs and this aggressive attitude of Sheikh Rashid also gradually started to hurt herself as well, which she never got the chance to tell about. Her life with Sheikh Rashid would have been at stake too if their marriage continued the way it was going.

On the other hand, as per the sources of Daily Mail claim that Sheikh Rashid had caught Princess Haya cheating on him with the long time bodyguard Russel Flowers. The extramarital affair of the Princess, in fact, was also later so popular among the closed circle of Dubai Royal family that Haya had no other option except for her to leave Dubai.

By designation Russel Flower may look small but he started off his career by serving as an infantry soldier in 2nd Battalion the Princess of Wales Royal Regiment from 2003 to 2009. He also worked as a Maritime Security Officer in Ocean Protection Services Limited before getting hired by Sheikh Rashid to protect his Dalham Hall Stud in New-market.

Russel’s closeness with Princess Haya began right after he was chosen to be the Close Protection Officer for Princess’ public appearances. Gradually, the family members of Sheikh Rashid treating him special and that is where Russel got the chance to win the heart of Princess Haya as well. In the end, the bond was so strong that the Princess used to shower the dear bodyguard with expensive gifts and that is where she also made the blunder as on one occasion His Highness Sheikh Rashid Bin Al Maktoum caught Princess Haya giving a rifle worth £50,000 to Russel. This was eventually the start of all the doubts revolving around Haya’s secret relationship with Russel and that later led to a proof when Sheikh caught Princess Haya red handed all alone with Russel on one of his visits to the United Kingdom.

While as of today, Princess Haya seek a marriage protection order in High Court of London, Sheikh Rashid has been silent about all the issue (except for the poem he released right after a few days of Princess fleeing from Dubai) The further matters to be dealt in the case include:

Princess Haya has even tried getting asylum in the UK, but that was turned down by the officials of the British Kingdom because they knew that such a move would affect the special relationship that Uk enjoys with Dubai.

However, they did give Haya extra security with her living in an £85m ($107m) townhouse in Kensington Palace Gardens.

For further updates, you can follow Elite Talks as they are covering the case in the best way!

4 Reasons You Should Try Whitewater Rafting