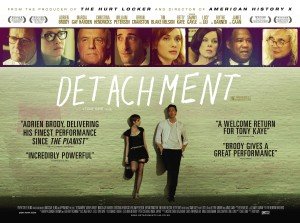 Pros: acting
Cons: directing, editing
Considering that British director Tony Kaye is best known for frequent and fierce clashes with Edward Norton over the 1998 “American History X” (for which Norton was nominated for an Oscar), it is surprising that Kaye could assemble the acting talent he did for “Detachment” (2011), starting with Oscar winners Adrien Brody and Marcia Gay Harden, and including tv stars Bryan Cranston, Christina Hendricks, Lucy Liu, William Petersen, plus old-timers James Caan and Blythe Danner. The latter two are quite funny and I wish there was more of them in the movie. Cranston (only one of whose scenes survived cutting) has said that he and other actors thought that Kaye had botched execution of the terrific script that was written by ex-teacher Carl Lund. (“I felt that Carl Lund, the writer of Detachment, wrote a really beautiful, haunting script. And I didn’t feel that it was honored. I was upset with that. I really was.. And I’m not the only actor on that film to feel that way.” From http://www.hitfix.com/blogs/motion-captured/posts/ZZaxMQkjPLuKr8Ku.99)
The very messy (think Terry Gilliam-messy) movie includes what could have been a very good movie about a school that is a dumping ground for difficult students and the burnt-out teachers (including the pill-popping Caan character, and Tim Blake Nelson playing a teacher who believes he is invisible) with Harden as the frustrated principle and Liu as the frustrated guidance counselor.

Brody plays Henry Barthes, a roving substitute teacher, hired to teach English for a month. Meredith (Betty Kaye; I don’t know if she is related to the director), an overweight, bullied, artsy female student develops a crush on him. Outside the school, he attempts to shelter and rehabilitate a teenage prostitute played by Sami Gayle. She is effective enough, but the whole good-hearted, tough-exterior prostitute and her savior is hopelessly clichéd and takes time away from the more interesting urban school movie.

Adrien Brody and Betty Kaye
As if these two movies were not enough to intercut, there is also a dying grandfather (Louis Zorich) who raised Henry after Henry’s mother committed suicide (he found her naked body) when he was seven… and whom Henry suspects had molested his mother.

Kaye (who photographed as well as directed the movie) intercuts bits of what look like home movies as flashbacks. And there are also chalkboard animations, plus what appear to be interviews of Brody from after the month at the school (he has grown a beard) and some prosaic poetry Henry writes.
I think that in general Brody and Harden are underappreciated and woefully underutilized (among the movies few have seen in which each (respectively) is especially impressive, I’d recommend “The Dummy” and “If I Were You”). Their performances and Betty Kaye’s and the snippets of performances by others justifies “Detachment.” It also has a great sequence on Parent Day (/night) and of a state education bureaucrat spewing BS.
I hope the out-takes are preserved, though it is probably too much to hope that someone other than Tony Kaye might assemble the potentially great school movie I suspect that he shot and then subordinated to the teacher/teen prostitute movie. (BTW Brody’s Henry shows no erotic interest in either of the troubled teenagers who look to him to save them from despair. If his grandfather was a pedophile, Henry is not following that heritage.)
There are two bonus features with Kaye and Brody, copresent but not interacting (in a studio(5 minutes) and at the premiere at the Tribeca Film Festival (3 minutes). Both include clips from the movie, so add little beyond the impression that the producer/star and director/cinematographer don’t like each other but are trying to promote the movie (which barely had a theatrical release and is being dropped from Netflix streaming in another week).