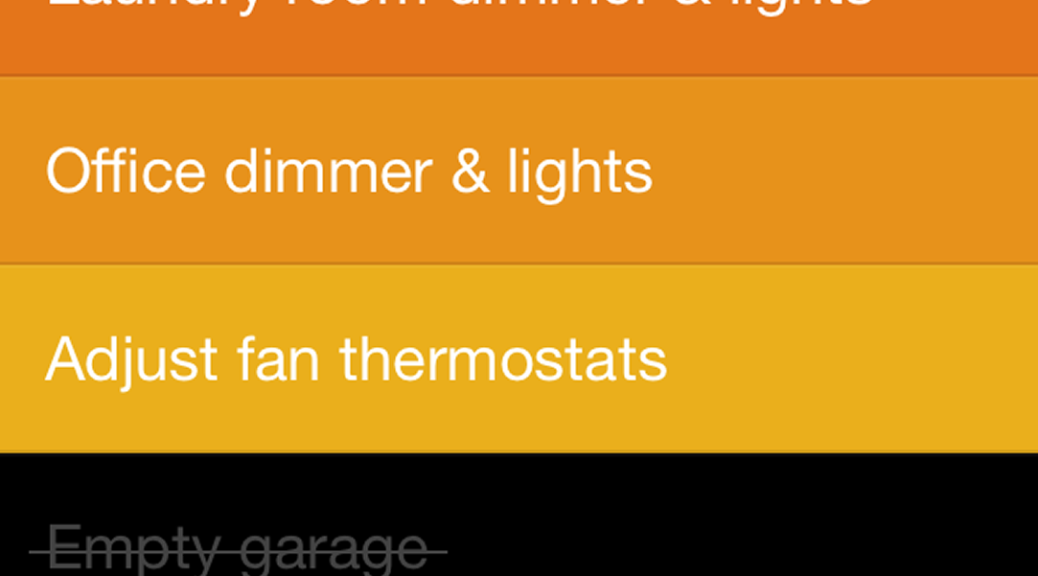 Pros: Simple, uncluttered UI that just works.
Cons: Wish I could share a list with my wife.
Clear is a todo list app for iPhones and other iOS devices. I have been using it for over a year and I love it. As part of a special promotion it is FREE until Saturday so I wanted to let everyone know about it.
Clear made a lot of news when it launched because it was one of the earlier apps to rely entirely on gestures for control. When you launch it you don’t see any buttons or toolbars. Just a minimalist interface that takes you straight in to your todo lists.
Here’s what a list looks like. Notice there are no checkboxes or handles or buttons whatsoever. Just simple color coding from “hot” for high-priority to “cool” for low priority.

What do you do from there?
Pull down to create a new item.
Swipe left to mark an item complete.

Swipe right to delete an item from the list.
Press and hold on an item, then drag it to re-prioritize your list.
Pinch the screen to “zoom out” from a todo list and view all your todo lists together.
That’s pretty much it. It emphasizes simplicity over bells and whistles. I have used it to track my nagging little tasks that I have to find time to get around to. I have also used it for big projects like moving house, where there are a zillion things to do and they’ve gotta get done.
My sole wish is to be able to share a todo list with anyone. My wife and I use Zenbe lists for our shared task lists, because two different users can modify the same list with Zenbe. But I’d much rather use Clear – everything else about it is superior.
Clear is free today because they basically screwed up. They wanted to release a paid upgrade version of their app. So they tried releasing a second app called Clear+ but owners of Clear we’re outraged an they back pedaled. Now there is just Clear again but unfortunately the few people who DID buy Clear+ have no good way to get Clear, because Apple does not offer a way to migrate users between apps. SO, long story short, RealMacSoftware is making Clear free for a short time so everyone can migrate over and they can get on with their lives.
You’re the real winner here because you too can get Clear for free whether you’ve owned it before or not.
But don’t wait! This free period is only 24 hours. On Saturday March 8th Clear will return to its usual price of $4.99. If you miss the free period, don’t worry. It’s definitely worth five bucks.

Rules of DevOps consulting Quality Engineering That You Must Not Miss

A FUN AND AMBITIOUS ACTION GAME FOR SMARTPHONES