JUST FOR THE ‘SHEER’ FUN OF IT! 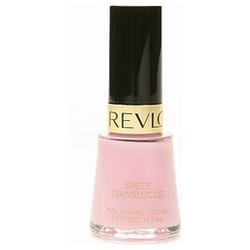 Cons: Brush could be a little longer – but not much!
I frequent a fast-food place a couple of times a week (mostly for coffee – uh huh). I can always tell who’s manning the drive-up window even before seeing the person, just by looking at her hands.  She’s a very pleasant young woman – with square nails ‘out-to-here’.  They might be purple, green, sporting a kangaroo decal, or an American flag – depending on her whimsy. Mine, on the other hand (no pun intended), are fairly short, neutral-colored, oval-shaped nails – and no doubt,  both of us are happy with our choice.
Did you know?

Revlon Sheer Translucide Nail Enamel (number 007) is just that – sheer, pale pink,  shiny nail polish.  If not for the shine, one might not even notice my nails are polished. Yet not until just now, as I looked at the bottle with my mag glass, did I realize it contains minute specks of glitter, so tiny ( referred to as micro-glitter), as to be almost invisible, but obviously light-reflecting enough to create the soft shine. The bottle also contains one ( or more) tiny ‘mixing balls’ to keep the polish blended.
I love a polish that glides on smoothly and evenly, covering the nail with one coat. Nothing is more annoying than a nail polish so thin it streaks, or so thick, it clumps. Another valuable feature is that it’s long-lasting. Because the color I use is quite pale, it’s difficult to see if the polish is chipping, fading or wearing off, but I did my nails three days ago, and after regular household chores, dishes, etc., they are as shiny and polished as the day I did them. Honest!
Applying. As mentioned, the brush (polishing wand) may be a little short, making it necessary to tip the bottle as the product is used, but I would rather put up with that inconvenience, than try to use a wand so long that one has no control. What’s more challenging than a right-handed person, painting a right-hand nail with a 3-inch brush? Anyone for polished fingers? This wand extends just an inch-and-a-half beyond the cap, allowing excellent control.

Scent. The scent of the polish is fairly typical – sharp, with a paint odor – but then, that’s what it is. Fortunately, it dissipates quickly.
Ingredients. The ingredients listed on the bottle are almost impossible to read, as the polish is pale, and the print ink is tiny and light-colored. If you have chemical sensitivities or concerns you may want to research the ingredients before using. See below.
Caution. Nail polish does have its downside. Some polishes “may” include *ingredients associated with certain cancers and toxicity to the central nervous system, and increasing the risk of diabetes in some instances.

CURLS THAT LAST FOR DAYS